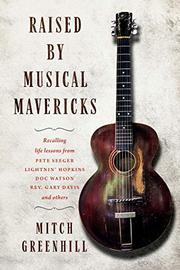 Professional musician Greenhill recounts his musical history with his idols in this debut memoir.

Anyone who knows folk and blues music from the late 1950s onward will likely be jealous of Greenhill’s experiences. His father, Manny, was a concert promoter, and a who’s who of luminaries would stay at the family house when they came to town. The young author was already in love with music after his mother, Leona, took him to see Paul Robeson perform a children’s concert. Family friend Pete Seeger helped solidify that love and got him started playing guitar. From then on, he soaked up knowledge at every turn, learning from legends. For instance, Odetta taught him how to slide up the neck for a ringing E7 chord, and the Rev. Gary Davis instructed him on how to wrap his thumb around the neck for a thicker C7 chord (which he helpfully illustrates with a photo of the finger position for aspiring guitarists—one of many attractive photos that accompany the narrative). The family moved from Brooklyn to Boston, and Greenhill fell into the Cambridge folk scene frequented by Taj Mahal, Joan Baez, and Bob Dylan. He became a professional musician and toured the country, living in New York City, Boston, and Los Angeles. Over the course of this book, Greenhill employs a wonderful, elliptical approach to storytelling, following experiences with particular performers over the course of a chapter and not following a strictly chronological course. The stories are very personal and engaging. For instance, Greenhill writes about how Lightnin’ Hopkins rudely spat out the eggs that Greenhill’s mother cooked for him (he found them too runny); the 16-year-old author saw this act as “transgressive” and “wild,” and it coincided with the teen’s taking his driver’s test, which he saw as another form of freedom. There are some technical explanations that guitarists will appreciate more than laypeople, but they never detract from the overall story.

A charming and informative must-read for music lovers, with a personal touch for fans of ’60s folk and roots music.