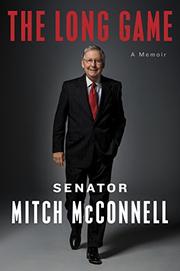 The Senate majority leader bares all—well, at least his fangs—in this account of a long career on Capitol Hill.

The long game: it’s a metaphor for life as well as politics. If one were not aware of McConnell’s actual performance in office, this modest memoir would be a source of Solomonic wisdom for politicians and good citizens everywhere—as, for example, when he details his opposition to a flag-burning amendment to the nation’s founding document, arguing that “no act of speech is so obnoxious that it merits tampering with the First Amendment,” and as when he urges bipartisanship, saying, “I believe that consensus among bitterly disputing parties is not only possible but a necessary condition for the tranquil flourishing we aspire to as a people.” Deliberative moments of this sort are fewer, though, than score-settling and scattershot complaints. Allowing that he’s usually portrayed as the villain of the piece, he has scarcely typed his name before lighting into his Democratic counterpart, Harry Reid, under whose leadership “the Senate Chamber frequently became little more than a Democratic campaign studio.” Thus it has always been, and thus it is now, but no matter: McConnell goes on to rehearse lengthily his hatred of the Affordable Care Act and fury over the party-line vote that brought it about, to say nothing of his dislike for the president and the “march of the Left” generally. Even with its affecting glimpses into real life—his overcoming polio as a child, for instance—McConnell’s book is too much an exercise in finger-pointing: the Democrats are “more rigorous about enforcing a rigid ideological code than Republicans,” those who opposed the Iraq War were “reckless,” and so forth.

Lauding the Senate as a tool of moderation and wise counsel is one thing, behaving moderately and wisely another. More examples of such exemplary conduct would have been welcome in the place of the litany of grumbles.