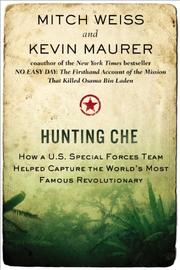 How a U.S. Special Forces Team Helped Capture the World's Most Famous Revolutionary

Much like “the day we got Bin Laden,” the devil is in the details in this military procedural about one of the few wins of Cold War–era spycraft.

Investigative journalist Weiss (No Way Out, 2012, etc.) and co-author Maurer apply many of the same fast-paced stylistic techniques that made a best-seller of Maurer’s collaboration with Navy SEAL Team 6’s Mark Owen (No Easy Day, 2012). This nonfiction thriller about the manhunt and subsequent execution of radical icon Che Guevara (1928–1967) focuses on his final months fostering a revolution in Bolivia. The authors are fortunate to have an extraordinary cast of characters on which to hang their story. By far the most fascinating is Maj. Ralph “Pappy” Shelton, leader of the Green Berets, whose compassionate ideas about counterinsurgency were decades before their time. He was in country to train the Bolivian army to find, trap and capture Guevara’s small army of soldiers. His right-hand man was Gary Prado Salmon, noble commander of the wildly incompetent Bolivian Rangers recruited for the task. The whole affair was crucial to the successful near-dictatorship of President René Barrientos Ortuno, whose government was stealing millions in U.S. aid. The spooks working behind the scenes were led by two Cuban exiles–turned–CIA agents: Gustavo Villoldo, whose father committed suicide at Castro’s command, and Félix Rodríguez, who successfully infiltrated Cuba in advance of the disastrous Bay of Pigs invasion. Blatantly pitched to armchair warriors and airport bookstores, the book is indeed exciting to read. Whether readers buy into the romantic revisionism of the cult of Che or take the authors’ position that he was an uncommon thug matters little until the finale. Surprisingly, the coda is more humanizing of its antagonist than readers might expect.

A slam-bang military drama whose unambiguous worldview overshadows the larger questions raised by the facts at hand.