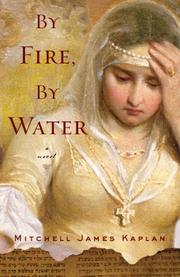 BY FIRE, BY WATER

Luis de Santángel’s grandfather was a converso, one of the many Jews forced to convert to Christianity. The chancellor retains an interest in his Jewish heritage, a dangerous prospect given the “New Inquisition” that has recently come to Spain. While Luis is influential and has the ear of King Fernando, he feels threatened by Chief Inquisitor Pedro de Arbués, charged with ferreting out apostates and all those who may have fallen from the true faith. Luis colludes in Pedro’s assassination, but faces more danger when Inquisitor General Tomás de Torquemada arrives to track down the conspirators. Torquemada captures Luis’s brother Estefan, and we learn in grisly detail how the Inquisition extracted “confessions of faith” from those who legitimately felt they had nothing to confess. Religious issues become even more complicated when the forces of Fernando and Ysabel push south into Granada to expel the Moors, an act prompted partly by religious fervor, partly by political expediency. When Ysabel finds out about a spurious anti-Christian manuscript entitled Toledoth Yeshu, she is led to an act of intolerance—the expulsion of all Jews from the kingdom—that rivals the cross-examinations and tortures of the Inquisition. Meanwhile, Cristóbal Colón, desperately trying to get funding for his voyage of discovery, needs to persuade those in power that going west is indeed a viable route to the Indies. Luis becomes Colón’s influential advocate at court, even putting up some of his own considerable fortune to fund the expedition. The chancellor’s political life becomes intertwined with his personal life when Luis falls in love with Judith, a beautiful Jew and talented silversmith.