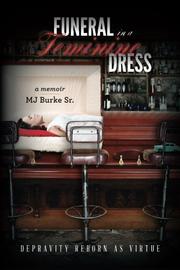 FUNERAL IN A FEMININE DRESS

Burke’s debut memoir follows the author’s childhood and his mother’s entrapment in a life of neglect and abuse.

Burke begins with a loving portrait of his mother, Verma, in the 1930s: a farm girl from Colorado whose feminist ideals and hopes for love imploded when she fell for Burke’s father. Verma forced Bill Burke, a pugnacious blue-collar Lothario, to commit to her when she learned that she was pregnant with his child. His response was caustic: “Fuck you and fuck this family shit,” and it forecast his attitude toward her for the remainder of her life. Though Burke tries to focus the lens on Verma and her descent into alcoholism, it’s often his own memories that haunt the reader. As a child, he waited in his family’s hillside shack well past midnight, making a game of guessing whether distant headlights were from his parents’ car. The bleak account is offset with a spirited narrative and a few laugh-out-loud moments. For example, Burke narrowly avoids an anal probe during a visit to the doctor after he’s stuffed toilet paper in his ears to drown out his parents’ fighting. His honesty about his complicity in his mother’s neglect, though occasionally self-indulgent, is unapologetically sentimental. Unfortunately, Burke ends the book with a lack of clear purpose. In the remaining chapters, we’re given an account of his sexual exploits in college and his staunch faithfulness once married, a somewhat self-congratulatory glimpse into how he’s raised his own family, and an argument championing atheism, which cites his mother’s plight as evidence against the existence of God. While the final chapters are haphazard and perhaps unnecessary, they don’t undermine Burke’s skilled writing and his ability to render complex lives.

Despite its scattershot ending, an arresting, devastating portrait of a tragic family.

THE SLUMS OF ASPEN
by Lisa Sun-Hee Park
Nonfiction