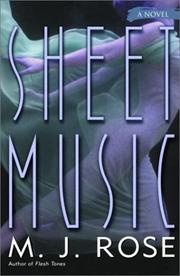 After three lusty thrillers (Flesh Tones, 2002, etc.), the author’s latest, centered on genius and mourning, becomes mired in its own emotional excess.

Justine Pagett, an American reporter living in Paris (since the death of her mother) has the scoop of a lifetime; unfortunately, it requires the monumental betrayal of her lover. The ensuing exposé, far from serving her career, engenders a sort of blacklisting, leaving Justine nearly broke and desperate for an opportunity to reclaim her professional standing. A long article on the reclusive Sophie DeLyon may be the only thing that can save her reputation. Sophie, a fictional protégé of Leonard Bernstein’s, is a force of nature: redheaded and wild, she’s composer, conductor, lover to many, beholden to none. She reigns as a sort of queen at Euphonia: an estate on the Connecticut shore used as a conservatory for only the most gifted. Sophie, approaching old age, has decided she wants to tell her story, and Justine, ex-lover to cellist and Sophie-apprentice Austen, seems the perfect choice. But nothing goes right, especially Justine’s reaction to being back in New York City. Justine is consumed by her mother’s death: no memory can be happy, no keepsake comforting, no location nostalgic because each reminds her that her mother died unhappy. She blames her father, who wasn’t loving enough, and her sister, who wasn’t there enough in the final days of illness. With anger and sadness overwhelming her, she drives with Austen to Euphonia only to find that Sophie has disappeared. She’s prone to eccentric behavior, and some think she’ll return—though with her sailboat smashed on the shore, it seems unlikely. While the search continues, Justine begins to uncover some of Sophie’s secrets—mental problems, an affair with her own son’s wife, her power over her students’ careers—and with these revelations come anonymous threats against Justine’s life.

Rose again strings a taut line of suspense, but her heroine’s relentless mourning overwhelms the story rather than adding depth.