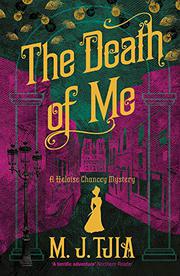 THE DEATH OF ME

A Victorian courtesan with a sideline in detection faces danger while her mother is plunged into even deeper trouble.

Heloise Chancey (A Necessary Murder, 2018, etc.) is visiting Paris with her current lover, Lord Hatterleigh, and Violette, a French-speaking maid she’s borrowed for the trip in lieu of her usual personal servant, Amah Li Leen, a Chinese woman who’s actually her mother—a secret they keep between themselves. Sir Simon Somerscale has asked Heloise to visit him in debtors prison, where, knowing of her detective skills, he asks her to travel to a sordid part of town to meet someone who may be involved in a sinister and murderous plot the government has recently uncovered. Back in London, Amah returns from a walk to discover that their house has been ransacked, but nothing seems to be missing, including the item she most prizes, an earring that was her mother’s and whose mate is in the possession of Heloise’s absent father. Made up as a man with Violette as her date, Heloise arrives at a raffish bar, where she meets an American named Ripley, barely escapes a brawl, and realizes that Hatterleigh’s pistol has been stolen from her pocket, where a booklet has been left in its place. As for Amah, first she’s blackmailed by a mysterious couple who’ve come into possession of the other earring and then she’s kidnapped while carrying jewels she planned to pawn for the money to buy the earring back. After Violette is mistaken for her temporary mistress and murdered, Heloise returns to London, where the government asks her to search for a possible bomber. Posing as a governess and hiring a room in a dicey neighborhood, she meets Ripley again and mingles with revolutionaries while Amah desperately tries to escape her captors and discover where they found the earring that offers a clue to the whereabouts of Heloise’s father.

Victorian atmosphere abounds in a twisty, exciting tale of danger and lost love.