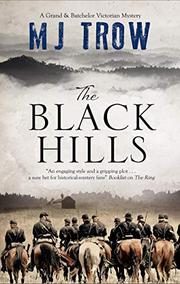 Victorian sleuths get a request from controversial Gen. George Armstrong Custer for help.

Just as the killing of several Indians by American soldiers has prompted Chief Gall, “the worst Indian living,” to stand watch conspicuously on the hills nearby, Custer is called back to Washington by the secretary of state for war himself to testify in a fraud investigation. Custer’s fluttery wife, Libbie, excited to leave the frontier for the capital, insists on accompanying him. Custer sends a vague request for help to his West Point classmate Matthew Grand. Though Grand deems Custer a nearly illiterate idiot, his partner, James Batchelor (The Ring, 2019, etc.), is intrigued by the prospect of seeing the Wild West. Will Custer pay handsomely? They’re in. The quartet connects in Washington, where Custer triggers government outrage when his testimony implicates President Grant’s brother Orvil in corruption. It falls to Grand to convince the president to reinstate Custer in his Dakota command. Putting his own reputation on the line, Grand succeeds. Then it’s off to the Black Hills with Custer, who’s excited to showcase his regiment. An inept blowhard, Custer handles his command with breathtaking incompetence. There’s an angry confrontation with Thompson, a belligerent soldier. Later, while scouting the hills, the company finds a dead Indian boy and, not far away, Custer’s horse, Vic. Near the horse is a dead soldier, Trooper McGee. Where to start investigating?