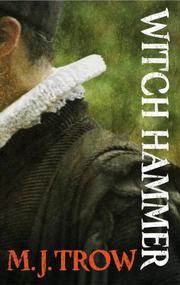 Kit Marlowe, who accidentally destroyed his first draft of Dido, Queen of Carthage, is chagrined to learn that Ned Alleyn, a thespian performing as part of Lord Strange’s traveling players, has not only absconded with the only other version of this drama, but is claiming to have written it. Hoping to track down Alleyn, Kit tags along with the troupe, but his plan hits a few roadblocks. First, Joyce Clopton, accompanying the troupe for safety after her father has been ruined and his assets confiscated by Sir Edward Greville, asks him to assassinate Greville. Next, Ned Sledd, the troupe’s manager, is found dead with a dagger in his throat. Then, Cawdray, a widower, and Hayward, a well-to-do theater junkie, decide to ride along with the troupe as it heads for Stratford, where Shaxsper, a young glove maker with writing aspirations, becomes an apprentice. Meanwhile, Greville’s men are dogging the troupe. A rampage ensues, and there’s quite a hullabaloo at a field of magical stones where witches cavort during their Lammastide celebration. Undaunted, Kit not only perseveres in his quest to find Alleyn but succeeds in deducing who murdered Stedd. All will be revealed as the troupe heads for its upcoming debut at Oxford.

Marlowe (Silent Court, 2012, etc.) makes an agreeable guide to Elizabethan life, and it’s fun reading quips between him and Shaxsper that will later appear in plays.