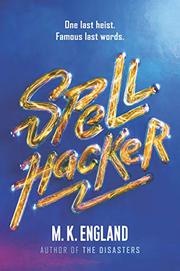 A close-knit team of magic thieves attempts one last job only to uncover a dangerous conspiracy.

Science fiction melds with fantasy in the futuristic city of Kyrkarta, where people use both advanced technology and magical energy, called maz. The Maz Management Corporation heavily regulates maz, leading teenage hacker Diz to illegally siphon the valuable resource with her best friends: spellweaver Remi, techwitch Ania, and muscle Jaesin. When the group’s final job ends disastrously, it leads to a shocking discovery—and it’s vital that Diz and her crew stop things before there is further damage. Action and humor combine in a compelling narrative that is rooted in Diz’s complex relationship to her found family. Over the course of their adventures, Diz struggles to let her walls down, hindered by trauma from her childhood. In particular, she slowly learns to give room to her romantic feelings for Remi, who uses they/them pronouns and has a chronic illness caused by contaminated maz. Readers will be hooked by the high stakes throughout, though a linear plot and a sense of inevitable success deflate moments of tension. The cast is racially diverse and joyfully queer.

Readers will want to buckle in for this high-speed, bighearted sci-fi/fantasy adventure.