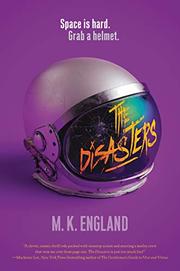 A diverse crew of space academy washouts cracks wise and kicks ass while racing against time to save Earth colonies from terrorists.

By the year 2194, space colonization is a fact of life, and future colony officers train at the Ellis Station Academy on the moon. Wannabe pilot Nax Hall is mortified at failing out of the program on his first day. When terrorists attack the station, Nax steals their shuttle to escape, along with three other Academy washouts: Rion, a rich black boy from London with an interest in politics; Zee, a blonde, athletic trans girl from Kazakhstan who’s skilled at medicine and surgery; and Case, a former child genius and tech prodigy with two moms (one Latinx, one Asian) who suffers from panic attacks. By the time they team up with Asra, a Bengali Muslim hijabi girl and talented hacker, they’ve been framed for the assault and have only days to save the colonies. As the five flee from planet to planet with terrorists on their tail, they build a believable friendship. The banter flows freely and the tension stays high while Nax contends with his growing attraction to both Rion and Case. The refreshingly normalized representations of Muslim, South Asian, trans, and bisexual characters enrich this appealing story.

An action-packed, entertaining blend of space hijinks, humor, and romance.