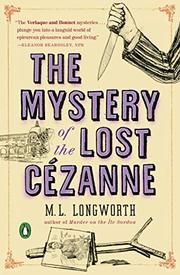 THE MYSTERY OF THE LOST CEZANNE

Recently returned from holiday (Murder on the Île Sordou, 2014), examining magistrate Antoine Verlaque is confronted with a dead postman, a mysterious painting, a beautiful professor, and a short-tempered lover.

Managing a small apartment building in the old city of Aix-en-Provence is not easy. But Mme. Chazeau handles the tenants of 23 rue Boulegon, famous as the last residence of Paul Cézanne, with aplomb. That is, until the discussion of who should have use of the small débarras on the first floor. Dr. Pitavy, a podiatrist, wants to use it for spare equipment. Mme. Joubert, who rents her two flats to students, wants one of her tenants to be able to keep her bicycle there. Eric and Françoise Legendre, having just moved in, have no opinion. But when retired mailman René Rouquet learns that the building's deed names him owner of the small storeroom, he goes postal, leaving the meeting and then quarreling on the street with Pierre Millot, who runs out to retrieve him. This disagreement is all the more uncomfortable for young Millot when Rouquet turns up dead. But even more uncomfortable is Rebecca Schultz, the striking African-American art historian who's standing in Rouquet's apartment, over his corpse, when Verlaque discovers it. Now Verlaque is charged not only with solving René’s murder, but with unraveling the mystery of the painting he left behind: a portrait painted with Cézanne’s characteristic brush strokes, but not of the artist's somber mistress, Hortense. Instead, it’s an image of a smiling young girl in colorful Provencal garb. Who's the girl? Is the painting a Cézanne? Verlaque tackles these puzzles, all the while struggling with a coldness growing between him and longtime love Marine Bonnet.

Art theft is a hot topic on the mystery scene, and no one’s heist is livelier than Longworth’s.