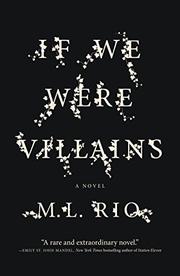 IF WE WERE VILLAINS

For a clique of aspiring Shakespearean actors at an elite arts academy, the line between performance and reality dissolves, with disastrous results.

In the prologue to this bloody, melodramatic, suspenseful debut novel, we meet former drama student Oliver Marks, now finishing up a 10-year prison sentence. He is visited by the cop who brought him to justice on the eve of his retirement, asking if Marks will finally tell him the truth of what happened that night at Dellecher Classical Conservatory. He agrees to do so after his upcoming release, on the condition that there are no repercussions for revealing his secrets. And so he begins. “Enter the players. There were seven of us then, seven bright young things with wide precious futures ahead of us…surrounded by words and books and poetry, all the fierce passions of the world bound in leather and vellum.” They are in their fourth year, the kings and queens of the campus, dividing among them all the best roles in the productions of Macbeth and Julius Caesar planned for that fall. But as the semester progresses it becomes clear that just as Shakespeare’s language has taken over their speech—they address each other constantly in quotes from the poetry and bits of repartee from the plays—his characters have taken over their souls, and the power struggles, jealousies, and murderous rages that fill the dramas have crossed into their real lives. “I have ransacked Shakespeare’s entire oeuvre with giddy abandon,” Rio confesses in her Author’s Note, managing to cleverly weave a whole new story from the poetry and plots of Macbeth, Caesar, Romeo and Juliet, and King Lear. "Do you blame Shakespeare for any of it?" the retired detective asks the released convict. "I blame him for all of it," the narrator replies.

This novel about obsession at the conservatory will thoroughly obsess you.