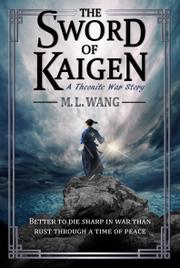 THE SWORD OF KAIGEN

This companion novel to a YA series tells the story of a mother and son caught up in a shadow war.

The “Sword of Kaigen” is the poetic sobriquet of the Kusanagi Peninsula, whose renowned warriors have long been the most respected in the Kaigenese Empire. The Matsudas are the peninsula’s most eminent warrior family, possessing inherited magic skills and boasting a long line of heroes who have defended the empire from foreign enemies. Fourteen-year-old Mamoru represents the next generation of the Matsuda clan, and he is already an accomplished student at the elite Kumono Academy. But a new student, Kwang Chul-hee, transfers from outside of the province and informs Mamoru that most of what he and his friends are being taught in school is propaganda. Mamoru is at first offended by Kwang’s claim—that the Kaigenese Empire flatters and lies to the provincial Kusanagi in order to use them as cannon fodder in their wars—but what if he isn’t lying? Mamoru goes to his mother, Misaki, to ask her about these things. She was once an accomplished warrior in her own right, though she put that life aside in order to marry into the Matsuda family and provide it with young sons. When she tacitly confirms Kwang’s claims, Mamoru can’t help but act rashly. And when Misaki receives a letter from her past warning that the entire Kusanagi Peninsula is in danger, she may be pulled back into the warrior’s lifestyle that she was forced to give up. Wang’s (Theonite: Orbit, 2017, etc.) novel mixes sci-fi technology with the martial arts lore of East Asia to create a fantasy realm that is intricate and original. When Kwang puts on the school uniform for the first time, he says (winkingly): “I feel like I’m in one of those old samurai movies.…It’s like I stepped through a portal back in time.” The book’s mythology is dense and takes some getting used to—readers familiar with the author’s previous Theonite volumes will likely have an easier time—but this inventive story of a warrior family is self-contained enough to be enjoyed on its own.