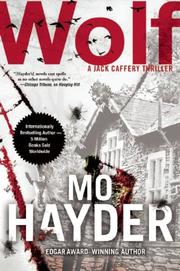 Oliver Anchor-Ferrers owns Turrets, an English country estate in Somerset. Arriving with wife Matilda, daughter Lucia and their dog, Bear, Oliver intends to recuperate after heart-valve surgery. While clearing the garden, Matilda discovers a string of intestines "draped almost delicately in the bushes," a discovery mimicking the residue left after a gruesome killing 15 years past. Back then, Lucia’s teenage boyfriend and another girl were murdered and disemboweled. Hayder’s story is complex, with narrative threads leading from the old murder; from the present, as the Anchor-Ferrers are held captive and tortured; and from the muddied mind of Caffery, who stumbles into the murderous affair as he searches out his own demons. Rural Somerset comes alive, with the lush green growth, the rain, and the cranky, isolated Victorian estate beyond cellphone coverage. Fueled by whisky, e-cigarettes and indifference to authority, Caffery’s the archetypical angst-driven hero, obsessed by the pedophile ring that kidnapped his brother decades earlier. It's the Walking Man, an itinerant loner who obsessively circles the site of his own daughter’s murder, who finds the dog, Bear, with the message "Help Us" attached to his collar. That draws Caffery into the hostage situation. Sexual obsession, rejection as fuel for violence and revenge on the part of an arms dealer all add to a chilling, ominous atmosphere in which mangled characters lurk—Ian the Geek and Honig, the captors; the retired colonel who lives nearby with a wheelchair-bound wife and a nurse in his bed; and Oliver, fraught with fractured mortality after his heart operation and yet strong enough to puzzle out the source of the obscene bloodlust.

Another adventure for Caffery, a protagonist much like James Lee Burke’s Dave Robicheaux or Paul Cleave’s Theo Tate, doomed to work "in the presence of evil."