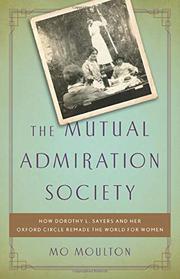 How Dorothy L. Sayers and Her Oxford Circle Remade the World for Women

A group portrait of a celebrated crime writer and her Oxford friends.

When Dorothy L. Sayers (1893-1957) arrived at Somerville College in 1912, women were second-class citizens, able to take classes but not earn degrees. Undaunted, the future novelist and other female students read their works in progress aloud—with “no false modesty or feminine shame”—at meetings of a group that Sayers dubbed the Mutual Admiration Society. In this well-researched group biography, Moulton (History/Univ. of Birmingham; Ireland and the Irish in Interwar England, 2014) follows four pillars of the “society” as they challenged stereotypes of women throughout their lives: Muriel St. Clare Byrne, a distinguished historian and playwright; Charis Barnett Frankenburg, a birth control pioneer who wrote popular child-rearing manuals; Dorothea Hanbury Rowe, the co-founder of an influential amateur theater company; and Sayers, the author of the Lord Peter Wimsey detective stories. Dividing its focus among the women, the book shows how they helped one another as friends, intellectual sounding boards, and, in the case of Sayers and Byrne, collaborators on the play Busman’s Honeymoon. The drawback to this approach is that Sayers was the star from the start, and a surfeit of prosaic details about her friends and their outliers makes for a slow-paced story, further encumbered with redundancies (most Wimsey novels are “enduring classics”), retrofitted jargon (the women risked “marginality within the gender politics of their era”), and unedifying exposition (Frankenburg found it “enormously stressful” to have three sons in uniform in World War II). Still, Moulton offers telling glimpses of Sayers, whether she’s making a daring plan to hide her son born out of wedlock or exulting when her agent sells Whose Body? to Boni & Liveright: “I am rich! I am famous!” Moulton also has a firm answer to the question of who inspired Lord Peter: “The early Wimsey is, above all, an idealized version of DLS herself, with bits and pieces of her experiences and her fantasies woven in to make a genuinely fictional character.”

Lord Peter Wimsey’s creator upstages her companions as they blaze trails for women.