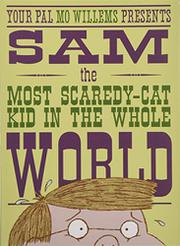 SAM, THE MOST SCAREDY-CAT KID IN THE WHOLE WORLD

A Leonardo, the Terrible Monster Companion

A little over a decade after Leonardo, the Terrible Monster (2005) failed to scare even Sam, “the most scaredy-cat kid in the whole world,” both monster and little white boy, now friends, are back.

Sam, readers learn, is still scared of everything except Leonardo, so they will not be surprised at his abject terror at the sight of monster Frankenthaler and her friend Kerry, a little black girl. Being “the second-most scaredy-cat kid in the whole world,” Kerry is equally terrified. Sam’s “AAAAAAAAH”s and Kerry’s “EEEEEEEEEK”s comically dominate the top halves of their respective sides of this double-page spread. Leonardo and Frankenthaler jump to the same, wrong conclusion: that each child is afraid of the unfamiliar monster. Apparently, however, it’s the unfamiliar human that provokes such fright, though the book leaves it up to readers to decide what’s so scary about each completely un–scary-looking child. A skilled, confident adult could use this moment to tease out a rich discussion. For their parts, Leonardo and Frankenthaler just leave it up to Sam and Kerry to “figure it out,” leading to a rushed, superficial exploration of commonalities and differences. As a companion to Leonardo, this shares its predecessor’s look and expectation-toppling gag, but it does not have the first book’s effervescence nor its perfect pacing—and, crucially, it doesn’t get at the heart of what it seems to want readers to understand.