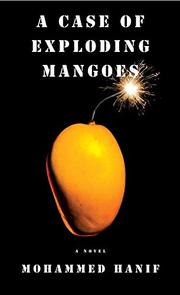 A CASE OF EXPLODING MANGOES

The central figure is a young military officer named Ali Shigri whose much-decorated father was found hanging from a ceiling fan, an alleged suicide. Ali knows, however, that his father’s death was something more sinister, and he sets out first to identify the responsible party, Zia, and then—by way of a loopy plan involving swordsmanship and obscure pharmacology—to exact revenge. The book’s omniscient narrator gets into the heads of multiple characters, including that of the General himself; his ambitious second-in-command, General Akhtar; a smooth torturer named Major Kiyani; a communist street sweeper who for a time occupies a prison cell near Ali’s; a blind rape victim who has been imprisoned for fornication; and a wayward and sugar-drunk crow. Even Osama bin Laden has a cameo, at a Fourth of July bash. But plot summary misleads; the novel has less in common with the sober literature of fact than it does with Latin American magical realism (especially novels about mythic dictators such as Gabriel García Márquez’s Autumn of the Patriarch) and absurdist military comedy (like Joseph Heller’s Catch-22). Hanif adopts a playful, exuberant voice that’s almost a parody of old-fashioned omniscience, as competing theories and assassination plots are ingeniously combined and overlaid. Uneasy rests the head that wears the General’s famous twirled mustache—everybody’s out to get him.

A sure-footed, inventive debut that deftly undercuts its moral rage with comedy and deepens its comedy with moral rage.