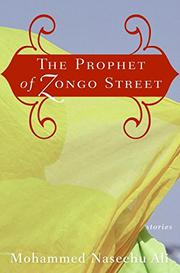 THE PROPHET OF ZONGO STREET

Ten lively, polished stories from Ghanian-American writer Ali about the transformation of Africa from old country to new.

Ali’s tales alternate between a hometown setting of Zongo Street—a densely populated neighborhood of Ghana’s bustling city of Kumasi, where the locals toil as small merchants—and the ethnic neighborhoods of New York City, where young Ghanian immigrants strive to make modern wages in predominantly white America. First, on Zongo Street, the 91-year-old Uwargida, one of the four widows of the Hausa King, shuffles out nightly to regale the neighborhood children with scary mythological tales, such as the story of the eternal dueling between the devil boy and the priest in “The Story of Day and Night.” In “Mallam Sile,” the eponymous bachelor tea-seller on Zongo Street marries the big, strong lady named Abeeba, whose daunting brawn intimidates her husband’s customers into settling their bills. “The Manhood Test” recounts hilariously the poignant events leading up to a husband’s having to prove his virility to his wife publicly while the old-lady lafiree judges. In “Man Pass Man,” the local swindler’s mean tricks on people lead to a terrifying interview with the devil himself. Transplanted to America, Ghanians have to tread carefully amid the entrenched racism of whites. In “Rachmaninov,” a young Ghanian artist hooks up drunkenly with a rich blonde American woman in the city and spends a terrifying night trying to sober her up rather than call 911 and risk a racial backlash. A Brooklyn musician in “The True Aryan” has to endure a tedious lecture in multicultural empathy by his Armenian cab driver; while the vulnerable domestic worker in “Live-in,” Shatu, a widow seeking work to support her three children back in Ghana, undergoes hostility from her elderly Long Island charge and untoward attention from her employer.

Overall, Ali shows an almost anthropological interest in his characters, and a keen eye for the humanistic detail: a richly rewarding cultural study.