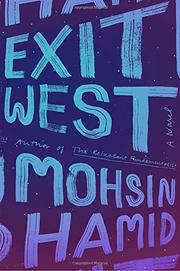 Hamid (Discontent and Its Civilizations, 2014, etc.) crafts a richly imaginative tale of love and loss in the ashes of civil war.

The country—well, it doesn’t much matter, one of any number that are riven by sectarian violence, by militias and fundamentalists and repressive government troops. It’s a place where a ponytailed spice merchant might vanish only to be found headless, decapitated “nape-first with a serrated knife to enhance discomfort.” Against this background, Nadia and Saeed don’t stand much of a chance; she wears a burka but only “so men don’t fuck with me,” but otherwise the two young lovers don’t do a lot to try to blend in, spending their days ingesting “shrooms” and smoking a little ganga to get away from the explosions and screams, listening to records that the militants have forbidden, trying to be as unnoticeable as possible, Saeed crouching in terror at the “flying robots high above in the darkening sky.” Fortunately, there’s a way out: some portal, both literal and fantastic, that the militants haven’t yet discovered and that, for a price, leads outside the embattled city to the West. “When we migrate,” writes Hamid, “we murder from our lives those we leave behind.” True, and Saeed and Nadia murder a bit of themselves in fleeing, too, making new homes in London and then San Francisco while shed of their old, innocent selves and now locked in descending unhappiness, sharing a bed without touching, just two among countless nameless and faceless refugees in an uncaring new world. Saeed and Nadia understand what would happen if millions of people suddenly turned up in their country, fleeing a war far away. That doesn’t really make things better, though. Unable to protect each other, fearful but resolute, their lives turn in unexpected ways in this new world.

One of the most bittersweet love stories in modern memory and a book to savor even while despairing of its truths.