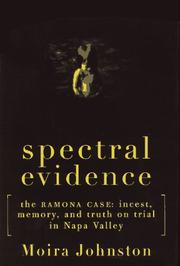 The Ramona Case: Incest, Memory, and Truth on Trial in the Napa Valley

An utterly captivating story of wine, wealth, and a family destroyed by accusations of incest. Johnston (Roller Coasters, 1990, etc.) cuts through an amazingly tangled web of recovered memories and warring therapists to bring to life the story of the Ramona family. Gary and Stephanie Ramona were enjoying the American Dream in Napa Valley, where Gary had a top sales job at Mondavi. But their daughter Holly developed bulimia in high school. A random choice led her to Marche Isabella, a newly minted therapist with no training in eating disorders or depression. She first met Holly in 1989, just as a tidal wave of recovered memories—visual images purported by some therapists to be repressed memories of childhood abuse—began. Soon Holly was taking sodium amytal, a questionable form of therapy, and declared she had been raped repeatedly by Gary. The stunning lack of proof (including the fact that Hollys hymen was practically intact) was no obstacle to what became a Job-like turn of events for Gary: His wife and three daughters left him, his newly constructed dream house was sold for legal fees, and he was fired from Mondavi. Holly filed suit against her father, and he, devastated, filed a malpractice lawsuit agains her therapists. His suit was ultimately successful, and Johnston offers high drama in her account of jury selection, competing expert witnesses, and courtroom testimony. Her research into memory science is meticulous, and she does a brilliant job of presenting both sides to this story, presenting Gary as not the best of fathers, but no rapist, and Stephanie as a weak-willed trophy wife whose long-brewing anger at Gary found its expression in incest accusations. Johnston is a bit thin on some of the legal context for this case. Still, a frightening look into what happens when pop psychology is mistaken for therapy, and when the dubious fruits of that therapy are mistaken for truth. (Author tour)