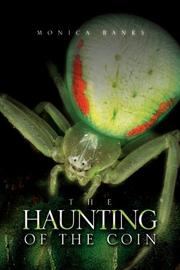 THE HAUNTING OF THE COIN

A spirit takes the form of a white spider to alter the destinies of several Japanese villagers in this supernatural thriller set in the wake of World War II.

Following the war’s end, the American soldiers return home, leaving a trail of broken hearts and fatherless children—a setting created with simple prose packed with historical details. A mysterious white spider watches with disgust as American Tom takes advantage of the young Aiko before he leaves the country. Banks describes Tom and Aiko’s affair—and others throughout the story—with the explicitness of a romance novel but the tenderness of an assault. A tryst between another American soldier and an embittered Japanese woman, Tomoko, results in an unwanted daughter named Sarah. To pass the time before she and Sarah can relocate to a military base, Tomoko moves back to her parents’ village where Sarah meets a large cast of characters and becomes assimilated to Japanese culture through a slew of Japanese words and phrases: “Sarah was to learn that the floor was called ‘tatami’ in Japanese, and every home in Japan had them.” Sarah’s cousins persecute her for her mixed race and her mother insists the girl is possessed by the devil—and may not be entirely wrong. Sarah can read minds, communicate with the dead and punish her enemies with increasingly powerful psychic abilities, which she hones with the help of several spirits who sometimes give her conflicting advice. When the white spider enlists Sarah’s help in finding Aiko, who is now pregnant and missing from her village, Sarah learns to use her gifts for purposes greater than revenge. The numerous backstories and subplots are difficult to follow at first, but they all feed into the central conflict: Aiko’s fate, and that of her family and village, rest on the ability of Sarah and the white spider to uncover the truth.

Twisted and entertaining, this broad story of revenge is multi-faceted but close to the surface—a bug’s eye view into the darkness of the human soul.