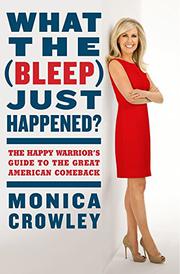 WHAT THE (BLEEP) JUST HAPPENED?

The Happy Warrior's Guide to the Great American Comeback

Political smut, slander, fiction, paranoia and conspiracy theories from the last four years are repackaged into this corrosive brew by Fox News contributor and former Nixon foreign policy assistant Crowley (Nixon in Winter: His Final Revelations about Diplomacy, Watergate and Life Out of the Arena, 1998, etc.).

Obama’s “unaccountable ‘czars’…could operate with impunity,” writes the author, "do all of [his] dirty work, and, at the end of a typical workday, White House chief of staff Rahm Emanuel would hand each of them a sweaty wad of untraceable bills.” Throughout the book, this kind of vitriol corrodes any basis for rational discussion. Those who might laugh probably won't check the author’s accounting of the stimulus program agreed upon by Congress and the executive branch in 2009, which included “$50 to convince Barbara Mikulski to jump off the ferryboat,” and “$500 billion to paint Bill Clinton's face on the side of the pleasure boat.” What might they think of those who get free Brazilian waxes and rides on Ruth Bader Ginsburg's Jet Ski thanks to the American taxpayer? As the book progresses, Crowley continues to blend hate- and anger-driven fiction in a strange never-never land of nonsense, in which no government social program, the author writes, “is about their superficial purpose.” As expected, in this “war for the nation’s future,” Crowley wants to “discard the impulse toward social and economic justice” through the gutting of entitlement programs. If we don’t act now, she writes, “we’ll all speak Arabic, spend Chinese currency, and get abortions at the 7-Eleven.” Most of the book is just a restatement of similar xenophobic, snarkily presented sentiment.

More bilious pickings for Fox News junkies; all others should take a pass.