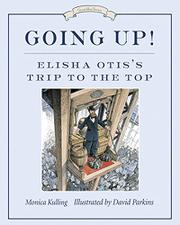 Elisha Otis's Trip to the Top

A buoyant if free-wheeling tribute to Otis—inventor not of elevators themselves, but of a safety brake that eased public fears of riding in them.

Intent on telling a colorful tale rather than a systematic one, Kulling injects more anachronisms (of an early inspiration, circa 1845: “Betsy could almost see the lightbulb over her husband’s head”) and invented dialogue into her account than dates or other specific details. She follows her subject from delightedly watching a hoist drop a load of hay during his Vermont childhood to a dramatically staged demonstration of his safety brake at New York’s 1854 World’s Fair. This is sandwiched between a poem on “Elevator Etiquette” and a quick closing wrap-up that serves in place of any source notes or other backmatter.  In his realistic, fine-lined illustrations, Parkins both enhances the sense of period and supplies the only hints of how Otis’ invention actually worked. He captures the narrative’s broad, high-energy tone in images of the inventor with eyes bulging, mouth wide open and arms flung out wildly during various Eureka! moments.

Not much for school-report fodder, but in the annals of American invention, Otis definitely rates the attention this profile (the first separate one for young readers since the 1970s) brings him.