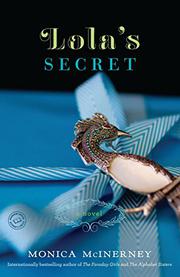 Life can be both good and bad, and you’re guaranteed heaps of both in McInerney’s follow-up to The Alphabet Sisters (2004).

Just ask great-grandmother Lola, the crusty doyen of the Quinlan family. The octogenarian has encouraged the entire family to take separate vacations during the Christmas holiday while she stays at the family-owned Australian Valley View Motel and holds down the fort. Of course, her family believes that Lola’s just looking forward to some much-needed rest since the motel doesn’t have any bookings while they’re gone. But wily old Lola, who’s become somewhat of an expert using the Internet, has other plans. She’s actually booked free rooms for a handful of people who have some very messy personal problems. Not that Lola’s aware that these people have problems, and not that their problems are really very central to the overall plot, since each problem is resolved before any of the potential guests show up at the motel. So, if Lola doesn’t have to deal with all the guests and their problems—after they happily resolve their issues, they cancel their reservations—what does she have to worry about? For one, Lola’s son wants to sell the motel and pursue different interests, and that kind of throws Lola’s future into disarray. Plus, Lola’s 12-year-old great-granddaughter is acting like a brat because her father is dating again five years after the death of her mother, and Lola’s surviving adult granddaughters, Bett and Carrie, are also acting pretty bratty and arguing like, well, like sisters. Then there’s the pushy volunteer at the local charity store where Lola spends a great deal of her time. She insists that they decorate the display window for the annual Christmas competition using her design. Lola, of course, applies the wisdom of her advanced years to straightening out every situation, while briefly reconnecting to her past and resolving her own future.

If McInerney fans search hard enough, they’ll find a faint heartwarming message somewhere in the midst of this ho-hum plot.