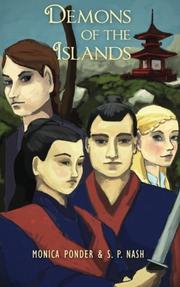 DEMONS OF THE ISLANDS

The mystical exploits of Sheer’An and company continue in this fourth installment of Ponder’s Cel’mystry series (The Only Road, 2011, etc.), which is the first to credit co-author Nash.

Sheer’An lives with a makeshift family of Busshidoe warriors, former slaves, and half-humans. She is a “First One in miniature...barely taller than a Gnome,” branded by the “Wyrd mark.” The family lives by “complex codes of honesty and honor that both the First Ones and the Busshidoe follow” and are bound together by one uncanny fact: “All of us have died at least once….” They often show solidarity; when Sheer’An travels to the Island colony to buy a musical instrument and encounters a discriminatory shopkeeper, her supernatural crew assembles to defend her by “creating some Chaos.” The shopkeeper, needless to say, reconsiders. The theme of prejudice reappears when the Shaougaun, the realm’s leader, starts persecuting religious islanders. After consulting the Great God, the gang receives orders to help the mortals resist. So begins one quest. Another starts when Redbow, Sheer’An’s brother, seeks to settle a grudge against the corrupt Conservatory, but must first seek out Clove Clearwater—a man “madder than a clan of Coppers on craze weed.” These tales are told from alternating perspectives. The authors show an obvious affection for their strong-willed characters, and Cel’mystry offers a rich and detailed world. But many readers will struggle to absorb the complex genealogies and mystical taxonomies, which frequently confuse more than please. “Mallandry here was blood bonded brother to Sheer’An’s father,” one character explains, “that makes her his relative by blood as well. As for me, Sheer’An addition is one of my own.” With so many complicated ties and unanswered questions about the world itself, many readers will have a hard time understanding what’s at stake in the characters’ quests, which unfold at a leisurely pace.

Excessive jargon and a gigantic ensemble break the spell of this well-meaning fantasy novel.