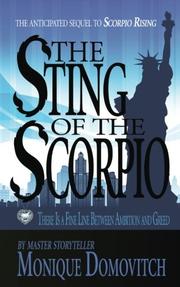 THE STING OF THE SCORPIO

Domovitch’s sequel to Scorpio Rising (2011) continues the love story of Alex and Brigitte, this time in America.

When Alex Ivanov returns to New York from Paris with his new bride, Brigitte, and her young son, David, his ambition and lust for power threaten their happiness. Once a penniless aspiring architect whose job fell victim to the scheming of a fellow employee, Alex begins to find success in real estate development; through his ruthlessness and daring, he soon becomes a wealthy, powerful developer. Realizing that her own promising career as a painter is incompatible with Alex’s ambition to break into high society, Brigitte gives up art and devotes herself to helping her husband, despite his growing aloofness. As the years pass, Alex begins grooming David to become his successor, without consideration for David’s own artistic inclinations and disregard for material wealth. In denial of Alex’s prolific, indiscreet philandering, Brigitte continues to efface herself in service to her husband—to both her and her son’s detriment. Though Alex achieves success beyond most people’s wildest dreams, it never seems to be enough; he begins to overreach, taking on increasingly risky projects that threaten to bankrupt his company. While Alex deals with a personal tragedy and an increasingly fractured marriage, the company’s precarious position is threatened even further. Alex now stands to lose everything, even his family. Unfortunately, the sequel is weaker than the original title. Alex’s megalomania and Brigitte’s rejection of her own goals are rendered too simplistically to be compelling. David is hardly developed as a character, despite his importance to the plot. Brigitte’s passivity throughout the novel comes as a disappointment; she’s much less dynamic than she was in the first book, so the deterioration of her marriage is less affecting than it could have been. Alex’s seamless rise from poverty to social prominence strains credibility at times, and the depiction of his business dealings is rather unsophisticated. One problem may be that the novel spans more years than its predecessor, whereby few events or emotional developments are explored in enough detail to provide the depth that could save the plot from cliché.

A rather stale continuation of the engaging love story introduced in Domovitch’s previous novel.