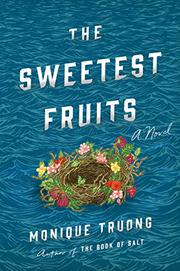 The author of Bitter in the Mouth (2010) and The Book of Salt (2003) imagines the extraordinary lives of three women who loved an extraordinary man.

Lafcadio Hearn is best remembered offering Anglophone readers some of their first glimpses of Japan after that country opened to Western travelers. But his life began in 1850 on an island that would later become part of Greece, and he had a sojourn in the United States before he journeyed to Japan. Hearn is the central figure in Truong’s latest novel, but he is present as an absence. To the extent that this is the story of his life, it is that story as witnessed by his mother and his two wives. Rosa, his mother, is sharing her tale after her son has been taken in by his father’s Anglo Irish family. It is her hope that he will one day want to know about her. Alethea is his first wife. Formerly enslaved, she meets Hearn while cooking in a Cincinnati boardinghouse where he is staying. Truong creates distinct, engaging voices for these women. Rosa’s story is permeated with a sense of loss, but she also shares some rather tart wisdom with the young woman who is writing down her words. Alethea’s tone is matter-of-fact and occasionally confrontational. The racial barriers that made her marriage to Hearn a scandal also circumscribe the dynamic between her and the journalist asking for information about her husband. Setsu is the daughter of a samurai, Hearn’s second wife, and the mother of his children. Like Alethea, she is telling her story after Hearn’s death. Truong gives Setsu her own style, too, one that is spare, elliptical, and personal without being obviously intimate. This creates a distance between novel and reader that is widened by the fact that Setsu is speaking not to a scribe unfamiliar with her story but rather to her dead husband. In order to impart important details to the reader, Truong has to force Setsu to tell Hearn things he already knows. Some readers will be unperturbed. Others may find their willingness to suspend disbelief tested.