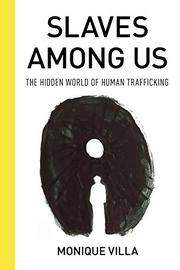 The Hidden World of Human Trafficking

A brief, clear introduction to the tragedy of human trafficking in the 21st century.

A 10th-generation Parisian who lives in London, Villa brings a welcome global perspective to her overview of present-day slavery and how readers can fight it. She has served for more than a decade as CEO of the Thomson Reuters Foundation, which promotes human rights, and she draws heavily on that experience as she describes the brutal fates of the estimated 40 million people worldwide who are “forced to work, through fraud or threat of violence, for no pay beyond subsistence.” Roughly 30 percent of the victims are trafficked for sex while 70 percent are trapped in involuntary labor. She includes oral histories of three survivors, two of whom suggest the range of forms modern slavery takes: Deependra Giri, an educated Nepalese man who signed a two-year contract for an office job in Qatar only to have to surrender his passport when he arrived, which meant he couldn’t leave when his employer paid a fraction of the agreed-upon salary; and Marcela Loaiza, a dancer in Colombia lured to Tokyo by a con man who promised to make her famous but whose associates demanded, once she got to Japan, that she pay them $50,000 by working as a prostitute and threatened harm to her family if she didn’t comply. Some of the crimes Villa describes, like sex trafficking, have garnered wide attention, but other shadowy practices are less well known. These include the Kafala, or sponsorship, system in place in the Persian Gulf region, which allows employers to confiscate migrant workers’ passports and deny them exit permits until the company says they can leave. In the most useful parts of the book, Villa instructs readers on what they can do to support anti-slavery efforts, including donating to groups like the Human Trafficking Legal Center, which provides free lawyers for victims. Villa’s use of real names and photos of survivors lends credibility to stories that might otherwise be too shocking to believe.

A vital guide for teachers, nonprofits, and others seeking to understand the global fight against slavery.