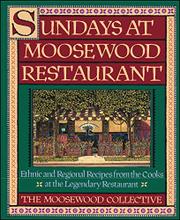 Back in 1977, Mollie Katzen, one of the founding cooks at the Moosewood restaurant in Ithaca, N.Y., put together a hippy-dippy, hand-lettered collection of recipes from the then four-year-old vegetarian institution--and rode the Zeitgeist to million-copy sales. Since then, Katzen and the Moosewood Collective have gone their separate ways, both profitably, and this compendium, with the present collective's 18 members each contributing a chapter on a separate ethnic cuisine, is far heftier, more systematic, and, in keeping with the times, a bit more sophisticated about once-exotic ingredients. Though this might not be your first source of recipes, even vegetarian recipes, for Indian, Italian, Mexican, and other cuisines now well represented on our cookbook shelves, the Moosewood cooks are both cognizant and respectful of culinary traditions, creative and careful in their innovations, and acquainted with some traditional recipes not overly familiar here. They are also separately versed in some less-exposed cuisines such as Armenian, Chilean, Finnish, and Eastern European, and their introductory notes on travels and family history lend a personal note that preserves the Moosewood bonhommi without drowning us in mush. In sum: a bonanza for Moosewood fans and other vegetarian cooks.