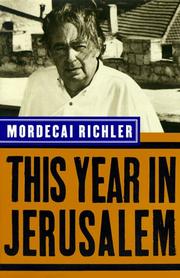 THIS YEAR IN JERUSALEM

In parts memoir, travelogue, political treatise, and extended essay on the tangled question of what it means to be a Jew living outside of Israel. The founders of the state of Israel had hoped that all Jews would come ``home'' after some 2,000 years of exile. Yet 46 years after the birth of the state, less than half the world's Jews live there, and fewer Jews live in Israel than in the United States. Richler (Oh Canada! Oh Quebec!, 1992, etc.) offers no startling new insights into this phenomenon or into the growing split between Israeli Jews and those living in what is called the Diaspora. What he does offer is an intensely personal account of two journeys: one, of a teenager in Montreal who becomes an ardent Zionist in the years leading up to the creation of Israel in 1948; and two, of a Diaspora Jew in his 60s who visits Israel in 1992, measuring the state against his idealistic dreams of decades before, and measuring himself against the Israelis who had once been his teenage comrades in Canada. Making it clear that his sympathies lie with the left, Richler offers a clear picture of the modern state and its highly charged politics, based on numerous interviews and extensive reading. The more interesting parts of the book, however, have to do with Richler's personal engagement with Israel, even as he defends his choice to live in Canada. When a journalist tells Richler that he left the US because in Israel ``I am at home,'' Richler writes, ``But many of us, unapologetically Jewish, do feel at home in North America, the most open of societies.'' It is Richler's passionate, personal wrestling with this issue that sets this book apart from many others on the subject. A provocative and highly readable exploration of Israel in the mind of a Jew who has chosen not to live there, of interest primarily to other Jews aware that they have made the same decision.