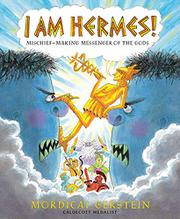 Gerstein follows up I Am Pan! (2016) with an account of the pranks and exploits of the goat-footed god’s equally free-spirited father.

Bursting with self-confidence, golden from helmet to winged sandals, and, on the cover at least, sprayed with sparkles, Hermes literally outshines a multihued, caricatured supporting cast of gods, demigods, mortals, and monsters parading through the loosely drawn sequential panels. The boasting begins with his birth, first word (“GIMME!”), and—still but 1 day old—invention of the lyre from a tortoise shell and theft of Apollo’s cattle by turning their hooves around so they can’t be tracked. Charming his way out of punishment (and leaving Apollo happily strumming a cowboy song on the lyre), he goes on as messenger of the gods to hoodwink the nasty twin giants Otus and Ephialtes, become a father and a grandfather, rescue Hera’s friend Io from the monster Argus (a knobbly, pitch-black boojum studded with eyes), bestow on Aesop the art of telling fables, and, as the other gods fade into retirement, ultimately find a bright new outlet for his particular talents: “The Internet!” It’s a selective account, with all of Hermes’ amorous adventures except the wooing of Penelopeta (Pan’s mom) skipped over and the violence of the author’s classical source material dialed down enough to, for instance, leave Argus alive and the giants not slaughtered but tricked into a permanent bout of arm-wrestling. Admitting in a closing note to a bit of embellishment (no kidding), Gerstein caps this rollicking revel with a short but scholarly resource list.