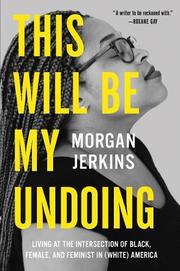 THIS WILL BE MY UNDOING

Living at the Intersection of Black, Female, and Feminist in (White) America

In the provocative essays collected in her first book, Jerkins meditates on how it feels to be a black woman in the United States today.

Brought up in suburban New Jersey, educated at Princeton, and now living in Harlem and working in publishing, the author often feels like an outsider. Her essays, usually deeply personal and always political, examine that unease. In the first, she goes back to elementary school, when she realized that “the only thing I wanted was to be a white cheerleader.” Other pieces consider the fraught issue of hair for black women, the self-repression imposed by the taboo against being thought a “fast-tailed girl,” the social pressure to identify as a “human” rather than as a “black woman,” and her ambivalence about the “black girl magic” movement. Some of her most effective essays take unusual shapes: one is an open letter to Michelle Obama, addressing her as “the beacon that reminds white people that 99 percent of them will never reach where you are,” and another is an ironic list of instructions on “How to Be Docile,” which provides the black female subject with everything she needs: “looks, deference to man, suppressed sexuality, silence.” At times, particularly in the final essay, which lists many of the black women the author believes could have helped her and didn't, Jerkins comes across as whiny. Sometimes, as in the piece about the many reasons she decided to have labiaplasty, she appears to be working hard to justify her actions. While she identifies herself as a feminist, the primary “other” against whom Jerkins sets herself is the automatically privileged white woman, “supported, cared for, and coddled.”

At its best, the book reveals complicated, messily human responses to knotty problems. Never intended as the final word on the black female experience in America today, it uncovers the effect of social forces on one perceptive young woman.