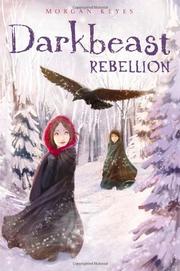 Keara, Goran and Taggart have been denounced for keeping their darkbeasts and are searching for a safe haven in this well-constructed sequel to Darkbeast (2012).

In their world, the darkbeasts, who have nurtured the children and assumed responsibility for their faults and negative emotions, must be killed as a preparation for adulthood. Those who refuse are named Darkers and face the constant threat of capture and punishment; this society adheres to ancient rules and precepts that remain finite and unchanged. Keara and her friends face cold, hunger and illness until they are rescued by a group that proves to be made up of false Darkers, bent on betraying them to the Inquisitors who carry out the laws of the rulers. They are captured and subjected to imprisonment, harsh punishments, deprivation and an uncertain future. A more mature Keara narrates her tale, supported, guided and comforted by Caw, her raven darkbeast, with whom she converses telepathically. Relationships with Goran and Taggart take on deeper complexity. Once again, Keyes conveys a richly imagined, fully developed and textured universe. There are friendships and betrayals among a large cast of new characters, plot twists and surprises, a conclusion that offers hope and a measure of freedom, and plenty of possibilities for the story to continue.