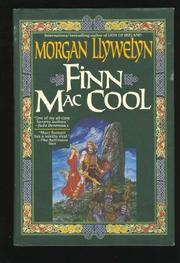 Another Irish historical from Llywelyn (The Last Prince of Ireland, 1992; Lion of Ireland, 1980, etc.), this tale goes back 1,700 years to rework the story of the legendary warrior Finn Mac Cool. Finn (``white''), born after a battle and raised by foster parents, knows nothing of his antecedents until he apprentices himself to a local poet from whom he learns the truth. Soon, the fiery young warrior and hunter attracts a following, and his war band defeats the roaming bandits that infest Ireland. The High King, Cormac Mac Airt, makes Finn the chief of the Fianna, or army, whose role becomes that of a wandering police force. Later, having arrogantly offended the Sidhe, Finn's wife Sive and son Oisin disappear, and he surrenders to madness. In due course, Finn will regain his wits, his son, and the leadership of the Fianna. But he is destined to fall in love with the High King's beautiful daughter Grania, unaware that Oisin also loves her; Grania prefers the handsome Diarmait and elopes with him. Dark deeds involving the couple are still to come, as is a dreadful revenge upon Goll Mac Morna, the man who slew Finn's father. Impressively researched, yet Llywelyn treats as straight-up history a tale which draws at least half its strength and endurance from mytho-poetic inspiration. Not surprisingly, then, the result lacks magic, in both the figurative and the literal sense.