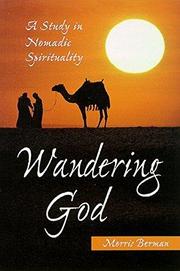 A Study in Nomadic Spirituality

Promising, vivid speculations on the evolution of mental states and varieties of consciousness from Berman (Coming to Our

Senses, not reviewed). In this third volume of his trilogy on the paths of consciousness, Berman traces the societal movement from horizontal, egalitarian relations to vertical, hierarchical ones. Lost in the transition, according to Berman, was the magic of everyday life, the hunter-gatherer's alertness that captures the eternal in a moment of permanent ephemerality. The integration of the universal into the particular through the acceptance of (and the revelation of living in) the world as it is also tamps the pain of alienation following in the wake of recognizing a separate self. Berman draws upon research to refute the interpretation of the Paleolithic period as myth-drenched; instead, he tenders the possibility it was marked by paradox—an utter watchfulness within the numinous landscape—in which children "cathected the whole environment" to mend the split between self and world. Whereas human beings are hard-wired to be on the move—"movement is the physiological substrate of the paradoxical experience"—sedentism and agriculture have been "forced upon us by a combination of external circumstances and a latent drive for power and inequality." Openness to experience faded, certainties and absolutes replaced our need for uncertainty and surprise, paradigms follow paradigms as ultimate (and ineffectual) fixes. Unfortunately, we can't just superimpose nomadic spirituality over our verticalities. As Wittgenstein recognized, and Berman concurs, "there finally is no way of jettisoning the transcendent without drifting into incoherence." But paradox can be a gadfly, challenging our notions of destiny, heroism, and certainty, exposing ourselves to the congruence of hunter-gatherer life, and, Berman suggests, "if our culture does have a future, it may well depend on the development of the dialectical possibilities that exist between horizontal and vertical aspects of life." Gilgamesh understood the paradox; it glimmers in works from Alice Miller to Ortega y Gassett to Bernadette Roberts; and

Berman lets it loose to humble authority and hierarchy. (illustrations, not seen)