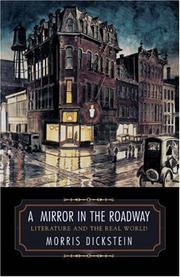 A MIRROR IN THE ROADWAY

Literature and the Real World

In his title piece, Dickstein (Distinguished Professor of English/CUNY Graduate Center; Double Agent: The Critic and Society, 1992, etc.) explains that the “mirror in the roadway” reflects Stendhal’s metaphor in Le Rouge et le noir that a novel is like a mirror carried along a highway, sometimes reflecting the sky, sometimes the mud in the road—and consequently you can’t blame the puddle for the mire but “the road inspector who lets the water stagnate and the puddle form.” The novel has a social function, and Dickstein explores it, beginning with the early mythmakers of urban centers New York (Poe, Whitman, Dos Passos, Melville, James, Ellison) and “Second City” Chicago (Dreiser, Richard Wright, James T. Farrell, Bellow). In considering the rise of American Realism, he argues that Upton Sinclair’s The Jungle (1906) truly “changed the course of history,” not only by exposing the unconscionable practices of the meat-packing industry, but also by revealing perhaps for the first time the “inner humanity of those trapped by birth or occupation near the bottom of the social hierarchy.” Dickstein has a facile ability to convey the great swath of literary criticism in a most readable fashion, sans clunky jargon, such as in “Edmund Wilson: Three Phrases,” where he explores the reasons this notably prickly critic continues to engage contemporary readers. Dickstein offers a cogent argument for reevaluating the work of Fitzgerald (“The Authority of Failure”) as a writer whose “reverses” made him more introspective, as well as more interesting to read. Other authors Dickstein reevaluates, moving from realism to modernism, include Mary McCarthy, Kafka and Raymond Carver. Céline (thanks to a 1966 translation) receives credit for the explosion of American vernacular, while “The Complex Fate of the Jewish American Writer” is a most thoughtful essay on American identity.