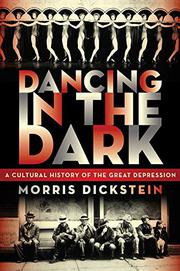 A Cultural History of the Great Depression

Just in time for our own era’s economic collapse, a literary critic looks back at the unusually rich art of the 1930s.

In this scholarly yet immensely readable study, Dickstein (English/CUNY; A Mirror in the Roadway: Literature in the Real World, 2005, etc.) examines how the artistic culture of the ’30s served a dual function. It helped people understand and cope with the terrible economic climate, and it allowed them to escape, for a while at least, the burden of dark times. The books, music, photos, movies, plays and dances of the period both reflected and influenced the decade’s unique state of mind. These wide-ranging works of art include the novels of John Steinbeck, Zora Neale Hurston, Richard Wright and Henry Roth, and the photographs of Margaret Bourke-White and Walker Evans, which turned an unprecedented spotlight on America’s poor and disenfranchised. Artists like Nathanael West, James T. Farrell, John Dos Passos and F. Scott Fitzgerald “emphasize[d] the limitations and distortions of the American Dream,” even as Cagney’s gangster films and Busby Berkeley’s backstage musicals reinvented rags-to-riches fantasies. At a time when audiences made room simultaneously for social relevance and artistic escape, singers as disparate as Bing Crosby and Woody Guthrie had a place. The big bands of Ellington and Goodman, the romantic comedies of Hawks and Capra, the dancing of Astaire and Rogers and the music of Porter and Gershwin all supplied a touch of class for the masses. Whether discussing Citizen Kane or Porgy and Bess, the poetry of Langston Hughes, William Carlos Williams or Robert Frost, Faulkner’s unique achievement and odd relation to the period, the films of Cary Grant or the elegance and energy of Art Deco, Dickstein always has something smart and lively to say. His scintillating commentary illuminates an important dimension of a decade too often considered only in political or economic terms.