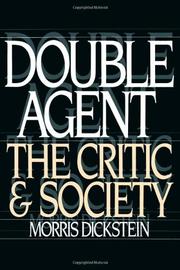 The Critic and Society

A prescription for the insular excesses of contemporary criticism that goes wrong as early as its title, since Dickstein (Gates of Eden, 1989—not reviewed) never explores the metaphor of critics as agents of two opposed powers, professing allegiances they do not feel. Few are likely to dispute Dickstein's familiar charge—that academic criticism has become increasingly remote from the experience, or even the competence, of educated nonspecialists. After examining the widening gulf between the babel of the academy and the narrowed prestige of book reviewers, Dickstein proposes a solution in the form of an alternative history or countertradition of cultural criticism (Matthew Arnold, Van Wyck Brooks, Lionel Trilling, Irving Howe, Philip Rahv, Alfred Kazin, and the discipline of American Studies), literary journalism (Francis Jeffrey, Edmund Wilson, F. W. Dupee), and belletristic survivors like Malcolm Cowley and—in two of his strongest and most surprising sections—H. L. Mencken and George Orwell. Appreciating and revising this humanistic tradition, Dickstein argues, offers the best hope for ``recaptur[ing] the public space occupied by the independent man or woman of letters not only between the wars but throughout the nineteenth century.'' Dickstein's revival of this tradition is timely and welcome, though his own writing, lacking the nobility of Trilling's voice and the incisiveness of Kazin's, isn't its most effective advertisement, especially in its vague choice of positive terms (``Art belongs to a human world'') and its search for painless consensus—as in a closing dialogue calling for a return to a new historicism that isn't quite New Historicism. A provocative survey of literary journalism, then, that's too ready to overlook the fact that genuine breakthroughs in thought are seldom achieved through compromise.