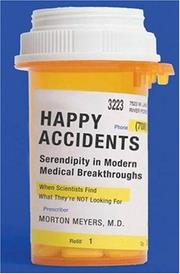 by Morton A. Meyers

A character-rich account of the role of chance in scientific research.

Meyers (Emeritus, Radiology and Internal Medicine/SUNY, Stony Brook) has collected dozens of stories, from Pasteur to present-day stem-cell researchers that show scientists looking for one thing, finding something entirely different and recognizing the potential of the unexpected discovery. A skilled storyteller, Meyers explains in layman’s terms the science involved, whether it is a cardiovascular breakthrough, discovery of a hallucinogenic or a new antibiotic or antidepressant, or an advance in the understanding of ulcers or cancer. Throughout the text are boxed “extras,” material that does not quite fit into his storyline but is fascinating enough to merit inclusion. These items include anecdotes about lobotomies, the Laetrile hoax, Einstein’s aortic aneurysm, even a urologist exposing himself at a scientific conference to prove a point. Beneath all this, however, Meyers has a serious message: Research in the United States has become centralized and bureaucratic, to the point of being stifled. Advances do not come from researchers targeted toward specific goals and following set procedure, Meyers warns, but from creative and open-minded researchers recognizing the significance of discoveries made while in the process of studying something else. Further, he faults the current peer-review process, citing numerous examples of discoveries that turned out to be major breakthroughs but had been covered up or ignored by this process. His concluding chapter contains suggestions on how to create an environment that encourages the curiosity-driven research that leads to serendipitous findings.

Illuminating science writing for the layman.