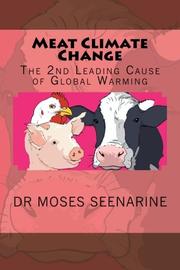 The 2nd Leading Cause of Global Warming

An argument for combating climate change through modifying agricultural practices and eating habits.

Seenarine (Education and Empowerment Among Dalit (Untouchable) Women in India, 2004) argues for a meatless diet as a key tactic for reducing greenhouse gases, minimizing weather changes, and improving human health. The book provides a dense overview of current climate science and policy, and reviews the impact of rising temperatures on not only the physical environment, but also economics, international relations, and gender politics. The reduction or elimination of meat consumption (referred to here as “carnism”) is held up as the solution to a thoroughly researched, footnoted argument. Seenarine draws on a variety of research to present a solid case for recognizing meat production as a significant factor in greenhouse-gas emissions. However, while this book’s overall approach may reassure current vegetarians and climate activists, it seems unlikely to persuade many meat eaters to reevaluate their diets. Although Seenarine has a clear grasp of the highly technical material, the prose is often lacking. Grandiose descriptors appear in each introductory section (the phrase “this compelling chapter” appears twice, and other chapters are described as “pivotal,” “discerning,” or “salient”), and clarity often takes a back seat to buzzwords (“Under normative patriarchal carnism, human emotions have been colonized in regards to nonhuman food animals”). The book’s complaints about neoliberalism and hegemony are also unlikely to persuade readers to learn more. Each chapter’s introduction includes a few paragraphs of a cautionary parable set on the unsubtly named Hindenburg Ahoy, a luxury ship sailing close to a massive hurricane, but although these fictional asides offer a welcome break from the forest of acronyms, jargon, and numbers that make up the rest of the text, they do little to shape the narrative as a whole. The book concludes with a series of sweeping policy recommendations but does little to address the practical aspects of their implementation.

An impassioned, thorough look at meat’s role in climate change that presents valid arguments for changing policy and behavior, but in a way that’s unlikely to sway new converts.