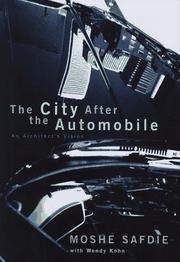 THE CITY AFTER THE AUTOMOBILE

by Moshe Safdie with Wendy Kohn

Some contemporary urban realities are confronted head-on here, while others are ignored, making it difficult to decide whether Safdie's ideas are visionary or merely silly. Much of this book is an erudite survey of familiar ground. The automobile has undoubtedly reshaped urban topography, with the flight to suburbia producing the need for more roads, parking, and cars. Accompanied by a diminished concern for public spaces, this has turned architects, once the planners of communities, into designers of individual sites. Habitat '67 creator Safdie (Architecture/Harvard) is not blinded by nostalgia for bygone days when parks and plazas were the shared center of city life, however. He recognizes that Americans are devoted to the convenience and independence of travel by automobile, and he envisions a transportation system that will retain these qualities while also revitalizing urban areas. Within his imagined city, ``conveyors''- -essentially elevators that move horizontally—will provide easy movement between buildings. Regional transportation will be based on ``U-cars''—publicly owned carlike vehicles—that can be picked up and dropped off as needed at depots located next to conveyor stops and rail stations. (High-speed trains will link cities.) Pedestrian walkways and open spaces in the core of the city will be protected from the elements by gigantic, retractable glass roofs, optimizing conditions for enjoying public life. While creating an urban utopia without completely removing automobiles, however, Safdie is amazingly obtuse about the political and economic values that he recognizes are at the heart of Americans' love for cars. A culture that worships private car ownership is not fertile ground for public spaces involving massive government expenditure and administration, and to imagine that the affluent will be willing to pay the necessary taxes is more fanciful than conveyors or U-cars. Architects should be dreamers, but we need more from them than castles in the air. (illustrations, not seen)