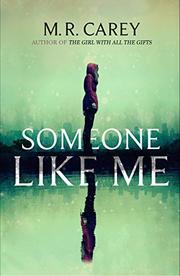 After fending off a brutal attack by her ex-husband, a woman fears for her sanity. The truth is something far more terrifying.

Liz Kendall is no stranger to her ex-husband’s flying fists, but after one of Marc’s weekends with the kids, she dares to speak up about him getting them home late. She had, evidently, “lost the habit of victimhood somewhere.” All hell breaks loose, and Liz finds herself on the floor with Marc’s hands around her neck. She feels outside of herself when she reaches for a vinegar bottle on the floor, breaks it, then grinds it into Marc’s face. Liz is horrified at her actions and at the feeling she had of being controlled by someone, or something, else. “She hadn’t willed this; she had only watched it, her nervous system dragged along in the wake of decisions made (instantly, enthusiastically) elsewhere.” Sixteen-year-old Zac is protective of his mom and his 6-year-old sister, Molly, and is ready to be free of his dad and his volatile temper, and the aftermath of the attack promises that freedom. Soon after, Zac befriends Fran Watts, who was abducted at age 6 and, since her rescue, has suffered hallucinations, particularly one of a protector in the form of an anthropomorphic fox named Jinx, aka Lady Jinx, who carries a magical sword called the Oathkeeper. Determined to get to the bottom of her trauma, she seeks answers from her abductor, Bruno Picota, dubbed the Shadowman, who is incarcerated in a psychiatric institution, and is shocked at what she learns. She’s even more shocked when she senses something different about Liz, something disturbingly familiar. Liz, meanwhile, increasingly doubts her sanity, but she’s determined to make a fresh start. Unfortunately, the voice inside her head is getting stronger, and she’s very, very angry. Carey, whose boundless imagination is in fine form, explores domestic violence, its aftermath, and the transformative power of love and hate with equal aplomb. Refreshingly, Carey resists the urge to instantly transform Liz from meek mom to brave avenger, but when Liz finally finds her footing, watch out, and the savvy but vulnerable Fran is a revelation.

This wonderfully strange and creepy tale is a thrilling, genre-defying treat.