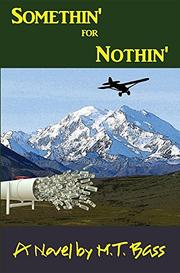 Recovering a decades-old crashed plane promises a fortune for a small group in Alaska, provided everyone can avoid double-crosses and murderous drug dealers, in Bass’ (In the Black, 2015, etc.) thriller.

Sure that they’ll flunk out of Ohio State University, pals Albert Stiles and Wesley “Waxy” Biederby leave school and head west. Or northwest, with Albert believing the two can amass wealth working on the Trans-Alaska Pipeline. Unfortunately, those jobs require a one-year state residency, and opportunity slips further away once Albert’s dad cuts off his credit card. The friends wind up with dishwashing and bartending gigs at the bar Beantown Bob’s Fenway Park West. Albert, still aiming for a pipeline job (and testing his luck by initiating a sexual relationship with Beantown Bob’s girlfriend, CiCi), hopes to acquire a union card for sale. Waxy, meanwhile, may have another way of striking it rich. According to co-worker Moe the Eskimo, a cargo plane transporting government payroll (presumably millions) crashed 30-odd years ago near his village. Jimmi the Pilot proves essential in searching the mountain, but when his latest drug deal with Mexican smugglers goes bad, he wants to find the loot as quickly as possible. Digging through a glacier is dangerous enough, but as others, including Albert, join the hunt, some may readily deceive to ensure the split goes fewer ways. Readers should recognize the story of a ragtag crew scouring for cash or gold, so betrayals are almost inevitable. Bass’ tale, however, exudes freshness, courtesy of a memorable snowy backdrop and indelible characters. The plane’s potential location, for one, makes a search unmistakably arduous, and there’s inherent risk for Waxy using a chainsaw in an ice tunnel. The narrative, too, offers no definite good or bad guys. Jimmi is part of a shady smuggling operation but also clearly fond of Waxy, while Albert does something that would make the average villain cringe. The only notable female players, CiCi and waitress Emma, don’t do much beyond forming romantic pairings with Albert and Waxy. But thankfully, neither woman takes guff from anyone—in her first scene, Emma’s thoroughly unimpressed by Albert and Waxy’s joke-laden dinner order.

A familiar plot fortified by delightful characters in a glacial setting.