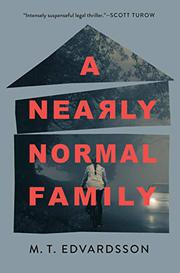 In Swedish author Edvardsson’s U.S debut, a family is shattered by a heinous crime.

Adam is a well-respected pastor, and his wife, Ulrika, is a defense attorney. Their daughter, Stella, has just turned 18 and is planning a trip to Asia. From the outside, the Sandells are the perfect family, but that facade crumbles when Stella is arrested for the brutal stabbing of 32-year-old Christopher Olsen at a playground. On the night of the murder, Adam finds Stella’s shirt covered in dark stains; he will do anything to keep his daughter out of prison, including providing a false alibi, but his decision contradicts his faith and shakes him to his core. The story is told in three parts, from the viewpoints of Adam, Stella, and Ulrika. Adam presents Stella as a troubled child and out-of-control teen. Stella reveals that much of her acting out stemmed from her desire to control her own life, her father’s overprotectiveness, and her mother’s perceived coldness. Further, Adam and Ulrika’s failure to report a sexual assault on Stella by a trusted camp director when Stella was 15 created a permanent fissure in the family. Stella’s whirlwind affair with the wealthy and attentive Chris is complicated by his ex-girlfriend, who tells Stella he’s abusive. The romance eventually spins out of control, but could Stella be a killer? Much of Ulrika’s narrative is spent in the courtroom during Stella’s murder trial, which may lead some readers to feel like she got short shrift. In between flashes of courtroom drama, Ulrika contemplates her marriage, motherhood, and her alienation in the face of what she felt was an impenetrable relationship between Adam and Stella. The murder mystery falls a bit flat and the resolution is overly neat, but Edvardsson ably weaves themes of parental guilt and sacrifice into a nuanced family drama.

Not terribly suspenseful, but as a dissection of a family in crisis, it works.