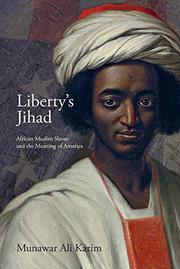 African Muslim Slaves and the Meaning of America
by Munawar Ali Karim
BUY NOW FROM
AMAZON
GET WEEKLY BOOK RECOMMENDATIONS:

A work of historical criticism advocates a thorough investigation of Islam’s impact on U.S. slavery.

Most people probably don’t associate American slaves with Islam. But as Karim explains in his debut book, Islam was an influential force within Africa and a continuing presence in the lives of many African American slaves. “The study of African Muslim slaves and their impact upon the various aspects of slave culture, African-American and American culture in general, has remained wanting,” writes the author in his introduction, arguing that ignoring this area of history simplifies African American identity and reinforces Orientalist notions of a clear divide between East and West. After offering an account of the way that various figures within academia have been receptive or hostile to investigating the Islamic faith among some American slaves, Karim goes into a history of the religion in Africa and its state at the time of the trans-Atlantic slave trade. He then profiles three known Muslim slaves in America: Job Ben Solomon (Ayyub bin Suleiman), who was born in Senegal and ended up in Maryland; ’Abd al-Rahman Ibrahima, a nobleman from Guinea who was known as “the Prince of Natchez” during his time in Mississippi; and Ben Ali (Salih Bilali), born in Mali and transported to Georgia. By examining their narratives and highlighting their relationships to their faith, the author sheds light on a long-overlooked corner of the American experience. Karim concludes the book by examining the complex place Islam holds in American life today, within the black community and outside of it. Islam continues to be depicted as a boogeyman by Donald Trump and his political allies even as opponents of the president who wish to counter that narrative hold up Muslims as increasingly valued participants in American life.

The author’s prose is scholarly without being dry, and during the slave narratives, in particular, he reveals himself to be an adept storyteller: “We also know that he wore a fez and long coat in the style of Muslims in Africa and fasted in Ramadan. He had at least twelve sons and seven daughters, all of whom bore Islamic names. He was a powerful and inspiring man, whose capabilities were recognised by his owner, Thomas Spalding.” Karim successfully weaves a number of historical trends together, from Yarrow Mamout to Muhammad Ali to 9/11 to Khizr Khan, showing how often Islam has been seen by its practitioners and opponents as something at odds with the American status quo. The author’s perspective is fairly Islamocentric, and he is perhaps more interested in establishing the existence of a Muslim tradition within the U.S. than in, say, resurrecting the backgrounds of these slaves for the mere sake of accuracy or multiculturalism. While Karim makes no pretense of objectivity, his arguments are persuasive and expose a significant hole in the mainstream view of American slavery. History fans of all backgrounds should be intrigued to learn of the surprises and complexities still hidden in this nation’s past.

A compelling and illuminating call for recognizing America’s earliest Muslims.