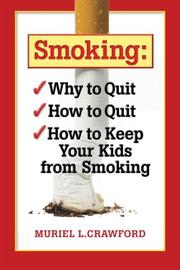 Smoking kills; that’s common knowledge. But readers may not know all the innumerable ways in which smoking also disables, alienates and otherwise causes harm, all of which are detailed here.

As its subtitle suggests, Crawford’s (Smoking: 201 Reasons to Quit, 2009) book is organized into three sections: Why to Quit, How to Quit, and How to Keep Your Kids from Smoking. The first section is the most substantial and most successful. Crawford, a lawyer for the insurance industry, authoritatively outlines seemingly every conceivable drawback to smoking, from the possibility of fatal disease to the difficulty of selling a car that smells like smoke. With such varied examples, the book is certain to furnish at least one reason that will strike home; for instance, even the most fatalistic, anti-social person might be alarmed to learn that sidestream smoke could kill his or her beloved pet. Crawford may oversell somewhat when she discusses the growing social stigma attached to smoking—as part of an argument that may inadvertently create a perception of smokers as a persecuted minority—but in general, she makes a case in which few could find fault. Her advice about how to quit seems solid, although the perspective of a therapist, or even a former smoker, rather than a nonsmoking lawyer, might have strengthened the rhetoric. The multiplicity of tips—particularly those related to smokers getting every other aspect of their lives in order before quitting—could appear daunting enough to discourage some readers from ever making the attempt. The advice on how to keep kids from smoking comes from Crawford’s tried-and-true experience as a parent of nonsmokers—a respectable accomplishment. However, it might have been judicious for the guide to acknowledge a gray area that comes before helpless addiction, as well as the fact that a strong parental reaction also has the potential to cause rebellion. Despite these minor flaws, the advice is clear, comprehensive and utterly convincing. Of additional appeal is a foreword by TV actor Jack Klugman, who lost his natural voice due to smoking-related cancer and then became an anti-smoking activist before his death in 2012, just before the book’s publication.

Through incontrovertible evidence, Crawford compels smokers to summon the will and the means to quit.

A LIFE IN SMOKE
by Julia Hansen
Children