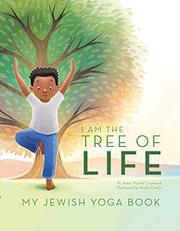 I AM THE TREE OF LIFE

This Jewish yoga guide is filled with animals.

If children had to list their favorite Biblical characters, they might not mention “the snake that slithered in front of Pharaoh” or “the giant fish that swallowed Jonah” or “a thirsty camel that drank from Rebekah’s water pitcher,” but all of those animals are featured in this picture book—possibly because they match up perfectly with yoga positions. Children may find the snake appealing, because it ate up all the other snakes in the palace, but many would rather be Rebekah—who offered water to needy travelers—than the camel she fed. Each page of the book showcases a character or object from the Bible—like Noah’s Ark or David fighting Goliath—along with an illustrated lesson in yoga. The poses are acted out in the pictures by two vacant-eyed children—a black boy and a white girl—with small, blank smiles on their faces. (The skin tones of the Biblical figures range from pale khaki to pale amber.) If the choice of subjects is slightly haphazard, some of the figures are genuinely inspiring, like Sarah and Abraham, whose tent (downward dog) sheltered wanderers in the barren desert. A book that combines yoga instruction with the Bible is probably aimed at a niche audience, but even that audience may feel a little befuddled.

This guide works better as a bestiary than as a picture book.