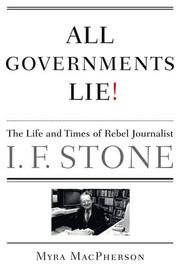 The Life and Times of Rebel Journalist I.F. Stone

“I don’t think the primary job of a free journalist in a free society is digging out the dirt. . . . The primary job is not to disgrace anybody or defame them, but to provide understanding.”

So said the fearless journalist Isador Feinstein Stone (1907–89), “Izzy” to his friends. Throughout his long life, writes MacPherson (She Came to Live Out Loud, 1999, etc.), Stone had fewer friends than enemies. He was hired as a newsman at the tender age of 15, thanks to a friendship with a wealthy patron that began over a smart-alecky remark and a volume of Spinoza; his devotion to the classics and fierce repartee would become lifelong trademarks. Stone went on to write for a range of liberal publications, including the short-lived PM, traveling illegally with Holocaust survivors to Palestine, later confounding his admirers by reporting on Palestinians displaced by the newcomers. He attained greater renown in the 1950s, when he tangled with Joe McCarthy, HUAC and Richard Nixon and was tagged a Communist for his troubles; MacPherson takes pains to refute the charge that Stone was a Soviet spy, reserving special scorn for Ann Coulter, “the Queen of Sleaze,” for reviving it recently. Stone was, of course, squarely on the left, though, in what he called the “time of torment” of Vietnam; he alienated New Leftists by his insistence on working within the system and by scorning protestors who used “such antics as displaying Vietcong flags, disrupting courtrooms, shouting obscenities and other obnoxious patterns of conduct.” (A niece of his, Weather Underground figure Kathy Boudin, would serve 22 years in prison for murder.) Proved right about official lies concerning Vietnam, Watergate and kindred matters, Stone gained enough readers of his famed Weekly to make him rich in old age—and something of an Establishment figure.

MacPherson is fearless herself in considering such contradictions as a muckraking millionaire, delivering a welcome and readable study of the influential journalist, ever missed.