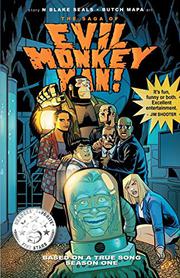 THE SAGA OF EVIL MONKEY MAN!

In this debut graphic novel, a man-turned-monkey dodges authorities while searching for a way to reverse the lab experiment that transformed him.

A lab explosion rocks the quiet hamlet of Cold Spring Harbor on Long Island. Mike Ross crawls out of the rubble, quickly alarmed upon realizing he’s a giant monkey. He can still talk, but that doesn’t placate locals, who flee from his sight or attack him. Fortunately, Lina Chin, who runs a kung fu studio, sympathizes. She and Mike head back to the lab, where they find scientist Dr. Menke Moon, a fully conscious head in a jar, and his odd assistant, Manny. Moon explains that his “project” was transport; he intended for Mike to switch places with a baboon, not to form a hybrid. When Moon promises he can “fix” Mike, their small group travels east to locate several necessary items. Meanwhile, FBI agents investigate the explosion and, in little time, pursue the monkey man. Mike and the others try staying ahead of the agents, though the hardest part seems to be keeping him hidden, especially once media outlets pick up the story. Seals’ breezy novel, which collects his comic book series’ first four “episodes,” is madcap fun. The tale is primarily visual. A flashback, for example, shows Moon—before he was just a head in a jar—brandishing a syringe for a project “volunteer.” And feds are depicted unknowingly passing by their monkey fugitive more than once. Bizarre turns sometimes unfold with nary an explanation, as when Mike and his friends apparently time travel. But as this book is the first installment of a trilogy, readers will hopefully learn in later volumes such things as the purpose of Moon’s key items (for example, a golden helmet). Mapa’s artwork is pristine, right down to characters’ facial expressions, from Moon’s maniacal grins to Mike’s scowls. This novel also includes the story’s genesis, which Seals based on a friend’s song, and its original five-page one shot, illustrated by Angelo Ty “Bong” Dazo.

An entertaining, colorful adventure with a striking hero.